In my day, it was called a lazy-eye or being cross-eyed. Apparently we now call it a squint, so Audrey has a squint.

If you had told me years ago that my child would have a squint, I’d have been pretty upset about it. It wasn’t exactly a blessing as a child and I have always thought how unappealing it must have looked – people cross their eyes to make an ugly face and well, that was my face!

I have memories of being bullied about this at primary school (under 10 years old), as well as at secondary school, but at a very young age it didn’t bother me. Although I do remember one incident from when I was probably around 6, when I was at home crying to my mother because a boy had been teasing me and calling me cross-eyed. I recall my mum telling me that the children were teasing me because they were jealous of my “beautiful eyes and lovely long eyelashes” and I just thought she was deluded. Because it certainly didn’t feel like I had beautiful eyes.

After some time with glasses and a patch, I had an operation around the age of 4 to correct the lazy eye. Shortly after, my other eye decided it too couldn’t be bothered to work in conjunction with the other one and face forward, so I had another operation shortly before my 8th birthday.

I don’t remember the first operation as such, just being in a bed with my parents at my side, constantly doing crosswords or playing this join the dots game my dad always played (that was a little like noughts and crosses). Oh and I think my parents’ best friends bought me a Minnie Mouse cuddly toy back from Disneyland around that time. Other than that, no pain or scary memories.

The second time I remember more clearly. I had a private room (with a TV!), I made friends with an old lady down the corridor (most other patients were there for cataracts), people gave me presents (I got a personalised Peter Pan book, very cool) and I had a terrible reaction to the anaesthetic. I awoke and became some sort of crazy angry child, thrashing my arms, trying to rip the patch off my face, shouting I was going to be sick… no I’m not… I still remember it so vividly and how my mum said I shocked all the nurses as I had been such a lovely little girl who turned!

Anyway, funnily enough, the fact that I’ve been through the operation (twice), makes the thought of Audrey needing surgery not such a big deal, my main worry would be her being on the receiving end of any bullying.

Although my operations did much to ‘clear it up’, my eyes were (and still are), subject to the odd turn in. It was always bad in photos (and I hasten to add I have never been able to control it and was only semi-aware of it happening) and if I have to look someone in the eye from a distance, I always worry it is going to happen, even though most people who have only known me in the past 10 years or so say they have never seen it happen.

But as anyone who has lived through secondary (high) school knows, if you have an obvious “flaw” of any kind, you are screwed. And it’s difficult to forget how brutal teenagers can be. Around the age of 12 or 13, a song came out called ‘Kriss Kross’. Wow, spectacular timing. It was sung at me a lot. There was also a horrible girl who used to ask me what it was like to have “bumble bee eyes” (wtf??), her profile now sometimes pops up on Facebook as someone I should befriend, ha.

Eventually my eyes were getting better and better and people seemed to have short memories as the bullying faded away. Luckily, shortly before turning 15, our dog bit me and I had a hideous scar on my lip as a new focus for the haters (!); but that’s another story…

Anyway, what’s odd is that I don’t think Audrey’s squint is ugly. I sometimes forget she has one (at her last eye appointment we were asked if she squinted less whilst wearing her glasses and neither my husband or I could answer the question). I’m actually surprised by how little it bothers me.

But then sometimes one of us takes a great photo of her and there is the squint… And I think; “If only her eyes were straight, that would be a lovely photo”. And I feel bad about that. Because it’s not a big deal and like my mother before me, I genuinely think Audrey has the most beautiful eyes.

The fact is, kids are bullied even if they have no obvious things to pick on (maybe they are too pretty or too thin or too clever), so we can’t do anything to protect our little ones from the harsh realities of school life. But as I passed a noisy school playground the other day, picturing what Audrey might be like as a little girl in her uniform, I decided she will be ok no matter what life throws at her, because she is awesome and she has so much love in her life. 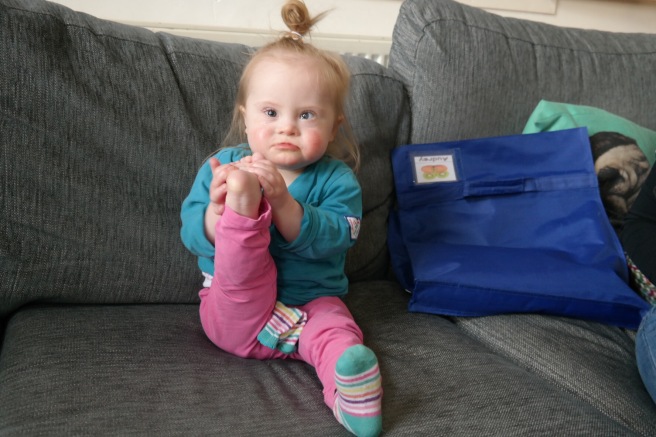