If you are reading this you probably know I share our life on Instagram and I also blog here. I am always open and honest, but there are many times that when I am enjoying “likes” and comments on an Instagram post about my beautiful children I am also watching them hit each other. Life is full of ups and downs, Instagram has it’s name for a reason; it’s tiny instances shared and you don’t always show the whole story in an instant.

I like to think that I share more reality than those monochrome “perfect” accounts filled with succulents and expensive candles.

However, right now, behind those squares of my smiling children, coffee shop visits and shiny new trainers: there is cancer. Again. 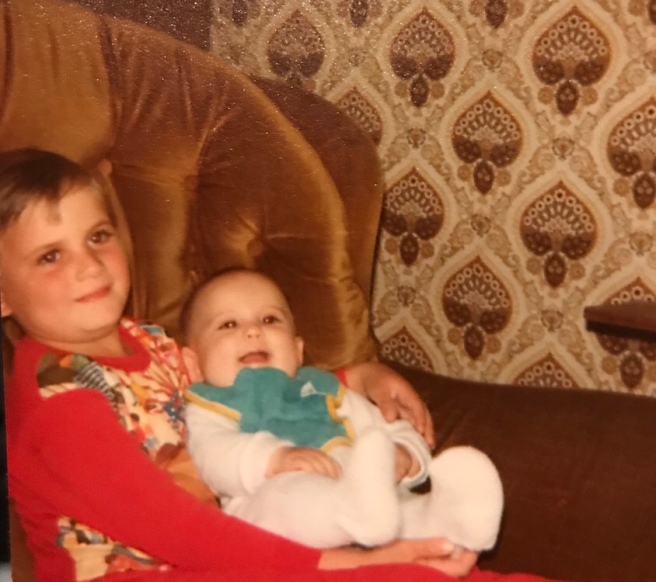 It always made me a bit uncomfortable, sharing too much of this sort of thing on social media, but this time I feel so utterly thrown by it, I want to acknowledge it. I want to make sure people are always aware what’s behind the squares.

Just before Christmas, my brother found out he had ‘operable’ cancer. So it was upsetting, but apparently easily sorted. I took him for the operation on 27th December. After that, you’d have hoped it was all onwards and upwards, but he had another niggling pain. So, (after the obligatory painkillers from the GP), there were more scans, mores tests and yes, the cancer had spread.

Today he is in hospital having his first round of chemo. Week on week it has been news that has uplifted us and punched us in that gut again. They can’t quite decide how bad this cancer is. I have continued my weeks on autopilot. Much like when my mum was diagnosed with cancer and when she died, I had to “go on” with an invisible dark cloud over my head.

And so I sit and sing “Wheels on the Bus”, I make small talk with other mums over tea and biscuits “How are you?”, “Fine, fine and you?” I placate squabbling children, make dental appointments, grill fish fingers and function as a normal human being whilst in the back of my mind I am thinking about my brother. Constantly. About how he is young (43), that he’s one of the best people I know and that he doesn’t deserve this. How the kids adore him, how he adores them and how I just can’t take anymore of this darkness. Pain, suffering, death, I’ve had enough.

Sometimes when the kids are resisting their coats or fighting over a plastic egg, I want to scream at them; “Uncle Graeme has cancer! That’s more important than this crap!” but of course I don’t.

It’s pretty crazy to think about all the people “functioning” right now. I mean, I was in TK Maxx at 6pm on Wednesday night buying pants, socks and a jumper for my brother (as he was unexpectedly kept in hospital after an appointment about his scans). As I queued up and subsequently paid, with all the standard niceties “Have a nice evening”, “You too”; I wanted to scream “My brother might be dying! I need to get these clothes to him in hospital!”. And as I walked in the rain from my car to his ward, crying because I just don’t want this to be happening, I actually wanted someone to ask me: “Why are you crying? Are you ok?”, which is odd considering my “Fine” stock response to friends.

I suddenly became very aware that each and every person you pass on the street might well be dealing with something. The harmless old “Cheer up love, it might never happen” feels like such an unbelievable over step of the mark, because stuff happens . We are all dealing with dark stuff, all of the time. Break ups, miscarriages, redundancies, illnesses, deaths, depression, you name it; someone is putting a brave face on over something.

I can only remain hopeful that all will turn out fine (how else can I go on?), but I guess I want to end on two cheesy words that are said a lot right now, but sum up how I think we can make the world a better place and as a reminder that you never know what someone is going through behind the squares/their smile/their ability to say “I’m fine” (when that is, in fact, bullocks); 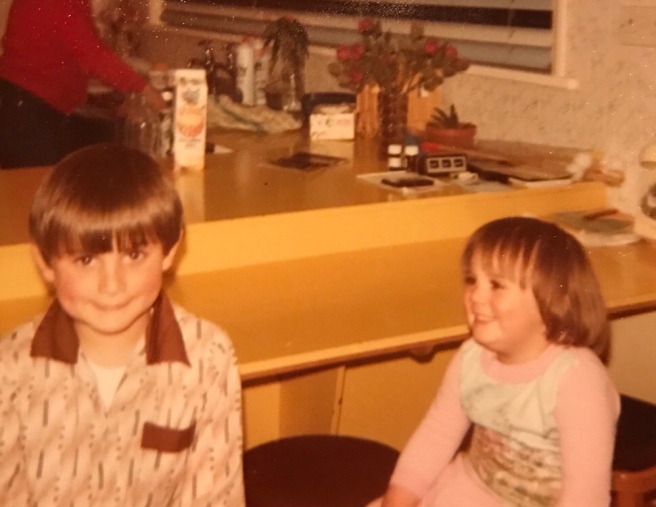 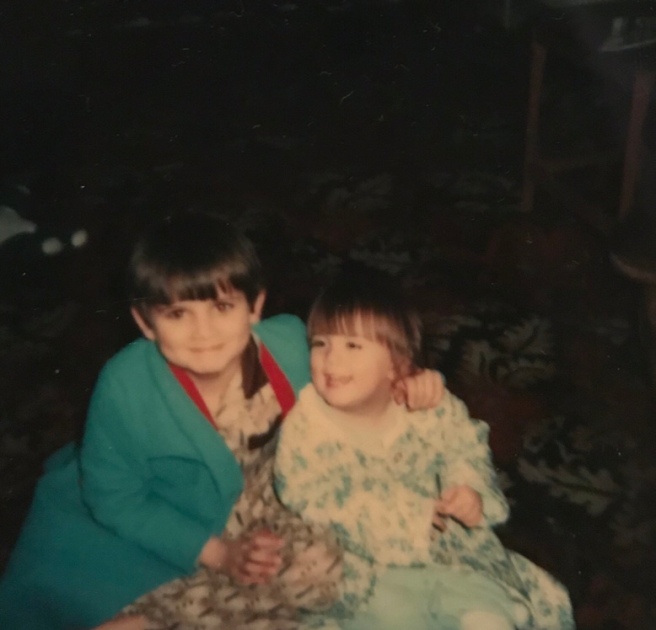 Once upon a time I was a happy-go-lucky human who couldn’t get their head around how people who felt depressed couldn’t just think about happy stuff and snap out of it. Yep I was that naive.

This was before kids. Before 3 members of my close family died of cancer. Before I realised that sometimes it can all just become too much.

After my mum died last year I would find myself sat in the mornings feeling unable to motivate myself to get dressed and do stuff with the kids. I would stare into space. I would feel despair. I would feel “what’s the point?” And I’d feel scared by those feelings.

The first time I ever had these kind of depressing thoughts were actually after having Rex. The sleep deprivation and his general unhappiness as a baby made me feel like we had ruined our happy family by introducing this child. But I was functioning, showering, seeing friends… and I didn’t want to die. I didn’t want Rex to die. I just wanted it all to be fixed.

And so according to the test “they” (doctors, health visitors) get you to take; I didn’t have post natal depression. Clearly I was depressed, but not badly enough for any intervention.

This actually leads me to another example of why I get so frustrated by those who talk about the “suffering” of a sibling if you choose to continue with a pregnancy after a Down’s Syndrome diagnosis – that you are willingly choosing to bring a child into the world that will require more attention and cause your other “typical” children to be neglected in some way. We had a lovely child with Down’s Syndrome, she had all the love and attention she could want. We gave her a typical sibling and yikes, he was needy! Audrey’s needs were on the back-burner. She watched CBeebies a lot. And even though we’ve come through dealing with a very needy baby, Rex is still very much the one who causes upset. He’s the one that needs more attention in general.

At bedtimes there have been many times when magical cuddles with Audrey have happened to a soundtrack of Rex having a tantrum over socks or some other nonsense. He has much more of a temper than his sister, he likes to push boundaries and in fact, he has started pushing and hitting and Audrey does so back. She has learnt a lot of bad habits from him – she never would have climbed on the coffee table pre-Rex and she never would have hit me. She had never attacked the toilet tissue before Rex showed her how it’s done! Having a child with special needs can be tough, but having kids is just tough anyway.

They are now both perfect siblings – holding hands and plotting together one minute, crying and fighting over a piece of cardboard the next. Lovely, exhausting little… angels. 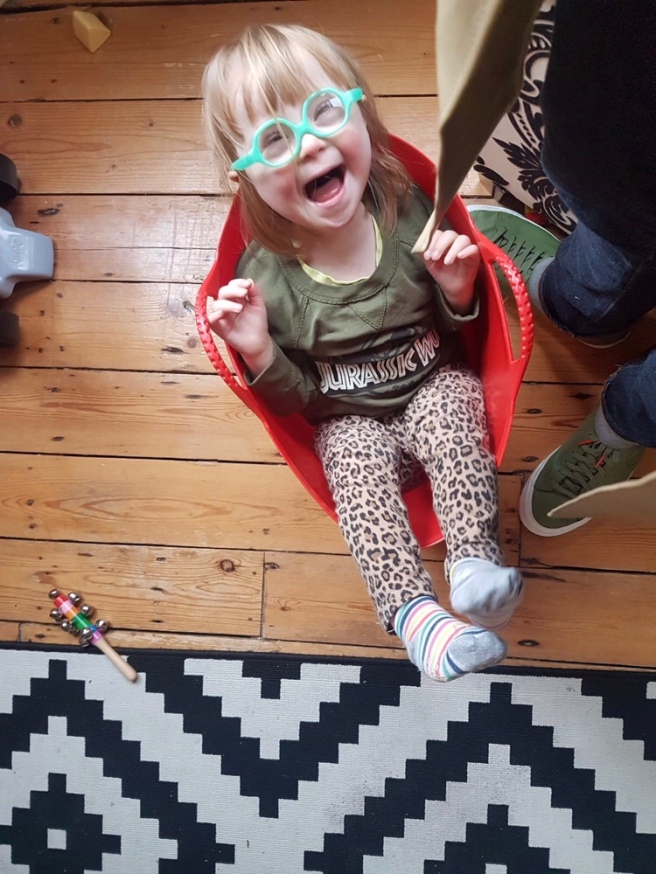 And so, with the level of adulthood I have now reached (bills to pay, important people to mourn, feral children to discipline), I find myself in therapy. I am attending counselling sessions, which is actually great. I find it particularly strange that it started about grief and soon became “good god my kids are driving me insane” and is now “please help me figure out how to be confident and do something with my life”. Well, at least we are progressing!

What you learn in therapy (or rather what I’m learning), is that “me time” is crucial to mental health. Doing what you love or doing something that makes you happy, regularly, will keep you sane.

I am fully aware that if I am lacking in “me time” it’s usually my fault. I still find it difficult to not think of the kids as entirely my responsibility. So whenever I leave them with someone (even my husband!) I feel guilty or like a clock is ticking and I need to get back to my job as mum. Crazy but true!

To briefly summarise the journey of a mother: pregnancy gives you a passenger/parasite to deal with, dramatic body changes and hormones. The baby then remains a parasite of sorts and your body is still different and very much not yours. Once they finally become a walking, talking more separate human, they create a lot of stress and mess and you perhaps still don’t feel like you can be yourself. I put on a new dress last week and by the afternoon Audrey had jumped on me and knocked my (thankfully not hot) tea all over me. I regularly find play doh on my jeans. This morning I was applying eyeliner in the bathroom whilst two children attacked my legs. I very often wee whilst being harassed by them both; “Mummy! Mummy? Do you need tissue? Are you finished? Wash your hands! Dry your hands! Mummy!”. It can feel all-encompassing and unescapable at times. How can I find the time to be me and not “Mummy”?

Thankfully, we have good settlers and our evenings are our own. I need to prioritise more time for things that keep me sane and also remember that although my day is peppered with stress and lunacy, it’s also full to the brim with beauty and love. I mean; look at them: