This week I watched the Channel 4 comedy, Catastrophe. I’m behind on most things that air after 9pm, so thank the modern world for catch up.

I started series one on the laptop with headphones whilst Ted watched football. He’s always so apologetic about sport on TV, but sometimes it just gives me a chance to binge watch something he might not be that into. In this case, he’d definitely like Catastrophe, but that’s just tough. I enjoyed Sharon Horgan’s ‘Pulling’, so I had high hopes for this programme.

Anyway, this week I got to series 1, episode 4. *Spoiler alert for the rest of this post*! The series is about a couple who get pregnant after a fling and decide to make it work, Sharon Horgan’s character is over 40, so this is classed as a ‘geriatric pregnancy’ (!) and the couple are told their screening results have come back as a high risk for Down’s Syndrome – 1 in 50. As soon as screening was mentioned, my heckles went up and I felt that wave of dread come over me. This is a well written, funny, absurd but realistic comedy, at no point did I anticipate an uncomfortable encounter with them tackling Down’s Syndrome screening as a storyline. So I was scared of what was coming and I reached for Ted’s hand…

Of course the news that they are high risk is considered bad news. Of course it is. I don’t want storylines that sugar-coat reality for the sake of political correctness or being inoffensive. If we had received a high risk result, it would have been bad news to us. In general, people do not wish for their children to be disabled, I can’t fault them for this realistic portrayal of the news.

Anyway, they soon discover the results were even more high risk – 1 in 25 – and they have to make a decision about going ahead with amniocentesis. They have an open discussion about their exposure to DS. Rob has an uncle with Down’s Syndrome (and he showed him his first picture of a boob, so he liked him), Sharon knew a couple with a child with DS, but remembers the woman alone in her 70s, still caring for her adult son. She describes seeing them in the supermarket, the mother looking tired and old. Rob has a fab response  (along the lines of) “well for all you know they went home, smoked some weed, watched Judge Judy and had a great time”. It’s a balanced and realistic discussion about experiences of Down’s Syndrome.

They go ahead with the amniocentesis, but it’s well described by Sharon as something she’s uncomfortable about doing.

And then they get a call with the results… The baby (foetus at this stage) doesn’t have Down’s Syndrome. They are relieved. Again, I cannot fault this, it is good news that would come as a relief. A little part of me is disappointed at this juncture, we’ve followed the story and ultimately, they’ve dodged a bullet, hurray!

But then they come good. Sharon is waiting in a queue and a beautiful little girl with Down’s Syndrome starts waving at her. At the sight of this child (as is so often the case when seeing a face with DS in the media), my heart swells. I think the mother apologises and Sharon says “She’s beautiful”.

Anyway, the show is really funny. It’s dirty c-word type funny, so not for everyone (my mum would be appalled), but I’m glad that a show like this could tackle a Down’s Syndrome storyline and do it well.

I tweeted Rob Delaney (just moments after my tearful relief at seeing that beautiful face of a girl with DS at the end) to say I loved it and he replied. I was pretty excited to say the least, he has over a million followers!! And he is a good-looking hairy man who writes an excellent show. Woo hoo!

Audrey has been poorly for a week and has quite a spotty face, so she’s not up for fancy pics, that said, she’ll still blow kisses even when under the weather!

And check out the colour scheme matching card from nursery!

Audrey’s speech and language has been progressing amazingly. We are constantly surprised by what she understands, what she attempts to say or sign and how much she remembers.

I guess this is how it is when something has lowered your expectations – a label is stuck on her warning she will be slow at learning, she will be behind, she will have a disadvantage. So when she excels, we are blown away.

Recently, Audrey pointed to the picture of a red bus on her pyjamas and said “bus”. When police sirens go by Audrey says “nee nar”. We go upstairs and Audrey says “upstairs” and for the first time, we’ve heard her saying numbers.

A sales assistant wearing a baseball cap is chatting to us and Audrey touches her head and says “hat”. Such minor things that make us so proud of her.

One of her consistent signs with no word has been water. A few weeks ago Audrey started saying “ter” along with the sign, which was great, but now she’s progressed to “ter ter”, I guess this sounds minor, but in our world it’s major.

This week was a big one for speech milestones – Audrey said “Audrey” (and signed it too), having spent quite a while saying “Dee” as the closest to her name and then only in reference to watching videos of herself on my phone! We have also been working on 2 or 3 word combinations and have had some success with Audrey (unprompted) saying “more please” and even “more toast please”.

She is also singing words and will pick out the ones she can say, like “star” and “are” or “head” and “toes”.

When I collected her from nursery yesterday they said she was shouting out names all day. It’s so nice as her peers have being saying “Audrey” for a while and she can now attempt their names too. I do find she is more likely to try the word if there is a sign attached, so we are still using Makaton even has her speech moves forward. Lots of her words would be hard to understand without combining it with a sign – a good example, some thing we do a lot, say and sign a lot, is… Cuddles. Audrey’s word for cuddles has, in recent days, sounded like “Dennis”, which has been amusing, but it’s taking shape and sounding more as it should as each day goes by. But because she says “Dennis” and signs for cuddles, we’ve been able to understand her which is great.

I’ve been so inspired by all the early years teaching that I’ve taken Audrey to, I am now going to undertake some Makaton training in the hope of using it professionally in the future. I love the idea of helping children progress and communicate through sign and play and singing. It’s all been so great for Audrey’s development. And educating adults too – people need to know what a great help signing can be for progressing little ones’ language skills.

Audrey has changed our lives just like any child changes their parents’ lives, but she’s opened up my eyes to many things I would never have been exposed to otherwise and she has made me want to change my career completely, so she has had a pretty dramatic effect on me! I’m so thankful she’s ours. 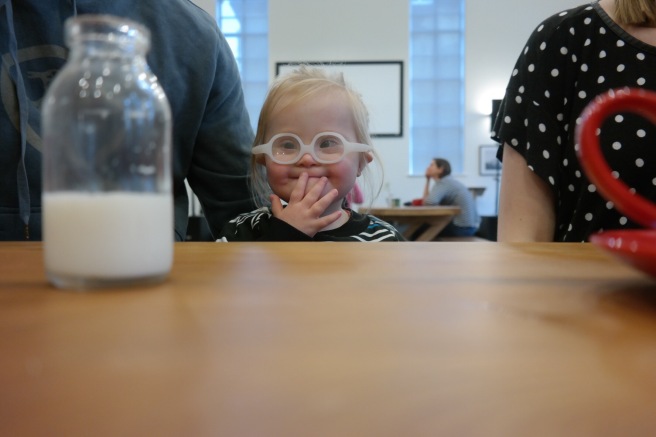 What a difference a week can make. After our last physio experience at the new Friday sessions, that left me tearful (to say the least), I knew I had to tackle it again and make the best of it…

We set off on the bus and Audrey was full of beans as usual. Waves and kisses, requesting singing.

We arrived at the group and we kicked off “walking” over to a table of stuffed toy dogs. The ladies were there welcoming and smiling, I explained how hard I found it and kept saying things like “I’m no good at pushing her, which is why I know it’s good to be here, because you are comfortable pushing her” and “Oh she is really going to hate that” – they (rightfully) picked me up on this and explained I needed to be more positive. We are “encouraging” her, not “pushing” and take on each task telling Audrey “this is going to be fun!” Rather than anticipating her hating it!

Actually, I was surprised at myself, because in general, I do think of myself as a positive person.

Today I was thinking about the ability to look on the bright side. I am generally a glass-half-full person without really giving it much thought. I mean, I don’t think of myself as always upbeat and full of smiles… But the fact is; I am a positive person by nature.

When Audrey was born I remember thinking (when wrestling with the news that she had Down’s Syndrome); what would be the worst thing that could have happened – would I rather this baby was dead? And of course the answer was no. I kept reminding myself that we were very lucky she was alive and that was the most important thing. Was this ‘syndrome’ really the end of the world? No.

Then when we had to deal with her coming home on oxygen, I kept reminding myself that we were so lucky she didn’t need any surgery and that her heart was healthy.

And now we have a bum-shuffler who cannot stand unaided, but I’m so very grateful that she is mobile at all and I focus on her other achievements which feel more important. Audrey can’t walk or stand, but she can ask for food and drink and she understands so much of what we say. Communicating is an amazing thing and it really helps us feel connected to her.
Her nature, just the way she is, naturally gives us reason to be positive. Smiles, giggles, kisses and cuddles – for the most part, that’s what our time with Audrey is all about. There’s no need to dwell on blood tests, physio sessions, developmental delays… In fact, I’ve seen many other parents of kids with DS revel in the fact they get a baby for longer. Time flies, but it’s flying a little slower with Audrey.

Onwards and upwards in our physiotherapy (I say this as Daddy and Bibi are taking her this week!!).

This was us taking a toilet selfie after speech and language therapy last week -which went very well by the way. We are working on two word phrases and since the session Audrey has said “more please” and “more toast please” woo hoo! 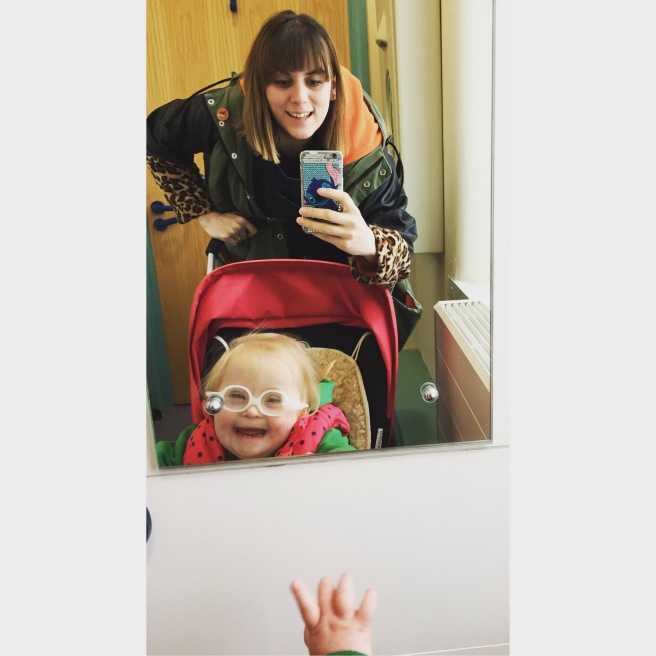