Audrey is using a new word, just in time for turning 2… She can say “no”!

I’m thinking this has come on as I’m having to say no to her more and more; since she can get in trouble now she’s mobile!

I still remember the health visitor coming when Audrey was around 1 and she asked me if Audrey understood the word no. I was a bit baffled, because I really didn’t need to tell Audrey no, I couldn’t really think of anytime I really needed to say no.

We are now in full swing with no. Audrey says “noooo”. She loves utilising a new word or sign and this one is really getting used!

I am saying no and naughty, as well as signing, when ever she does something she shouldn’t. At the moment that is;

Emptying photographs out of a box in the living room (we have to move this).

Shaking my make up bag frantically until everything flies out.

Pulling baby wipes out of the packet and sucking on them.

Audrey thinks the little finger waggle (for naughty), is funny and she basically just copies me. I don’t think “no” is having much of an impact.

Watch out world, Audrey is on the move!

It’s been a surprisingly underwhelming transition from random bum-shuffling (pivoting in a circle, sometimes resulting in movement by chance) to purposeful bum-shuffling (moving her legs to travel straight ahead to reach a specific target – usually a shoe or rucksack or the coffee table).

I expected whoops and a fan fare, but we were more like “is she moving forward properly?” And it was tested with her interest in a shirt sleeve dangling from the ironing board (as you do). Ted kept moving back and Audrey kept getting closer… Then we knew. Mobility was here.

When Audrey first rolled, I was cheering like crazy person and filming her to capture the milestone. I decided she was a genius and I wanted everyone to know what she had achieved at that very minute. She was ahead of her “typical” peers, it was very exciting.

Fast-forward to now. Her “typical” buddies are all walking (of course) and have been for about 8 months or more. Some where along the way the pressure for her to smash records and be a genius baby wore off. I guess I realised that one day it just won’t matter when she started moving. She’ll be walking alongside me and I’ll probably have a few little moments in my head (“yippee hurrah she’s walking!!”), but eventually it’ll just be something she does. I mean, it can be a little odd having a toddler who doesn’t toddle, but you get used to it. She does other things that are pretty great, like signing lots of words, dancing like a pro and an amazing elephant impression.

But now she also moves. Which is pretty major, so why the lack of fanfare? Well, she’s not very fast, so it’s not causing major stress in terms of baby-proofing (yet), in fact, she can sit still for quite some time when occupied by toys or music. I guess I also feel less inclined to prove she’s “achieving”, whereas before I wanted to be sure people knew she was doing well and progressing, I think I’m more comfortable with who she is. Life isn’t a competition; not even for kids with developmental delays. We’re not trying to beat her DS peers to the finish line. It still feels like Audrey is growing up ridiculously fast, even though she’s traveling at a much slower speed than typical kids, so why would I wish this time away?

Anyway, in the interests of full documentation, Audrey started her purposeful bum-shuffling on Saturday 28th March 2015. 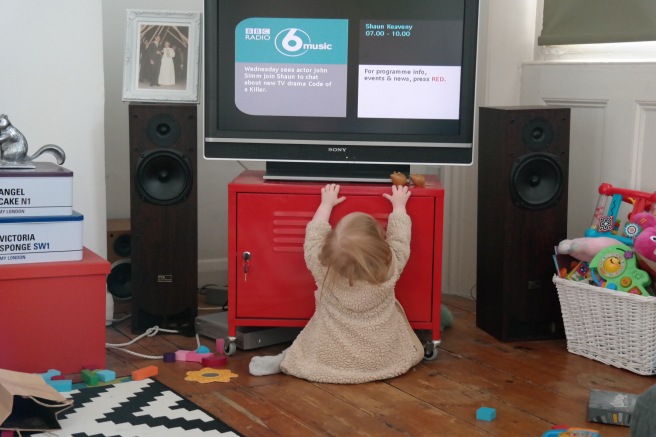